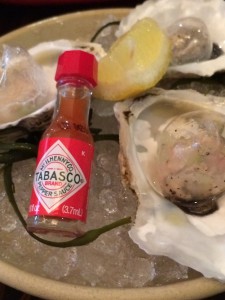 Unlike Wikipedia’s definition for Tongue-in-cheek, “a figure of speech used to imply that a statement or other production is humorously or otherwise not seriously intended, and it should not be taken at face value”, Tongue & Cheek‘s food and service is seriously good.  Some friends and I popped in for happy hour and worked our way through most of the happy hour menu.  We had the Beef Cheek sliders, Braised Short Rib Quesadilla, Korean Chicken Wings, and the Chilled Oysters, pictured above with a mini Tabasco Sauce.  Everything was delicious we went back for thirds (!) on the sliders and oysters.  Their drinks were also very good and so reasonably priced, by South Beach standards.  I am looking forward to going back and trying their other menus.