Going Green In Your New Construction? First Step Should Be Protecting Existing Trees

Well, it finally happened.  My neighbor has sold his home on a beautiful, tree-lined, deep lot in north Pinecrest.  It is not quite an acre, but I am guessing a huge home will be going up on the site.  I hope I am wrong and that our soon-to-be-new-neighbor will appreciate all of the wildlife their back yard is home to and remodel instead of tear down and build the maximum allowed home.  Over the years that we have lived in our house, we have enjoyed seeing fox and watching  large predatory birds nest and raise their young in our neighbor’s yard.

We are lucky to live in the Village of Pinecrest, which like many cities in Miami-Dade County, has landscaping regulations that include tree preservation, but I have witnessed lushly grown lots be completely bulldozed to accommodate  homes that cover the majority of the lot.  Once built, small oaks and palm trees are planted in the front and back yards with shrubs planted around the sides.

The house below is a great example of how existing trees can be incorporated into new construction.  The house on this lot was torn down but many of the trees were kept.  They provide shade and character for the house as well as a canopy to shade the street. 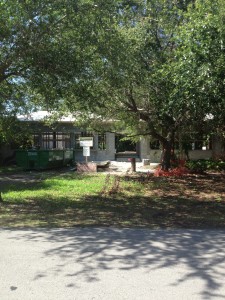